When is the Next eHarmony Free Communication Weekend?

What are Free Weekends?

eHarmony free weekends offer the best time to sign up to the popular dating site if you are ready for a no-nonsense approach to finding “the one.”
The eHarmony free weekend gives a great opportunity for singles to see what all the hype is about. All you have to do is sign up and take the personality assessment, be sure to give yourself 30-40 minutes for that, and then you can start having a play around with their service.
The downfall? You won’t be able to access everything an eHarmony paid membership entails, including photos of your matched profiles, which is a shame. 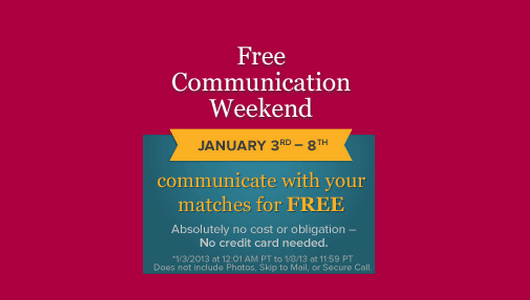 Can I actually speak to people?

Yes. You will be able to communicate to your matches via Guided Communication and if you are both happy to do so at the end of these steps, you are free to email each other. If you feel safe to do so, you can always move your conversation over to social media, e-mail, or even on the phone, but this would obviously require giving out information, so make sure you are savvy to our online safety guidelines before doing so.

There is no doubt that this is a great marketing strategy, eHarmony will play on your mind and your interests to get you to sign up. eHarmony boasts a matchmaking algorithm that was created to match potential partners based on personality factors that are said to be key in determining compatibility. It is this algorithm and belief that it can match users with personalities similar to theirs that creates interest amongst people in the dating scene and also the fact that eHarmony has had over half a million marriages between users who have met through their site since 2005!

I'm already a member, what can I do?

Simply use the site as normal and embrace the new users that are on the platform.

Make Sure You Are Ready for the Free Event

If you are waiting for an eHarmony free communication weekend before trying the dating site, we suggest going ahead and making sure you are ready to go to make the most of it.

By doing the above, the free weekend is in place, you’ll be able to utilise the whole time wisely, communicating with potential love matches for free!

If you find yourself hooked after the free weekend and you want to join, make sure you check out our eHarmony promo code page to make sure you get the best price for your chosen membership. As you might have guessed, eHarmony recommend that you join or 6-12 months, but studies have also suggested that 9 months is the optimal time to find your partner on dating sites.

Below you will find all of the free communication weekends for the past few years to help give you an idea of when to expect the next one - we hope it helps!