The direct competition to Tinder, Bumble offers a similar service with the most notable difference being that the ladies are in control. You swipe if you like the look of match and if both of you swipe right, then the female has 24 hours to initiate contact, otherwise its on to the next

Bumble Dating App Review: What is all the 'buzz' about...

REVIEWED BY: Paul
LAST UPDATED: DECEMBER, 2019
BIO: 20 something Male who switches between London and Scotland

So, my personal thoughts on Bumble.....I’m a bit fascinated by Bumble and the back story that comes with it. Bumble, to date, is the closest challenger to Tinder’s mobile dating dominance, so you might not be surprised to learn that the Bumble founder, Whitney Wolfe is in fact a disgruntled (with good reason) co-founder of Tinder. Wolfe left Tinder on bad terms in 2015 and since then has set out to take the dating world by storm in her own right, and as it happens, she isn’t doing too badly at all.
Bumble is near enough identical to Tinder but where it differs is the way in which it puts women back in control. Once matched, the woman must make the first move, something which as a man I’m not at all adverse to, but maybe I’m just lazy.

What has really impressed me is Wolfe’s commitment to promoting the right kind of feminism.
“I’m so tired of this notion that women only need to support women, why can’t we all support each other? I’ve run into women who can be highly problematic, detrimental and mean, just like I’ve seen in men. We as women, (with) this modern feminism, I’m worried we’re alienating the good guys. It’s not really living up to true feminism, which is really equality for everyone, right?”

An outlook on feminism which has proven to be a breathe of fresh air for many and it seems to be having a positive effect on her business too. 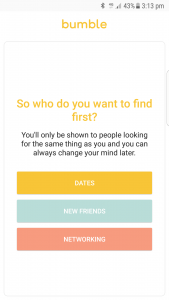 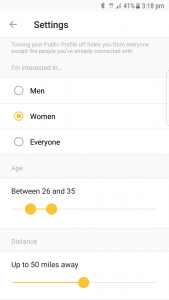 How Does the Bumble App Work?

Much like Tinder, you connect Bumble through your Facebook profile which will in turn populate a number of your profile pictures, set your location and age range and all you need to do from there is start swiping. (you can also sign up using your phone number, but it will take longer to popular your account and get going)
Apart from the female control element there is one major difference between Bumble and Tinder – no swipe limits. For anyone familiar with Tinder you’ll know that after a certain number of swipes you will not be able to swipe for another twelve hours - Bumble has no such limits.

The no limits feature is interesting, at first I thought it was a fantastic idea and was a remedy to what has been considered a major negative of Tinder, however, over time my thoughts have drastically changed. When you have no limits you find yourself swiping endlessly to the point where your decision-making starts to go out the window and your thought process goes down the drain. with Tinder, you know your swipes are going to run out and so you are a bit more careful when considering each and every swipe,

Another feature I do really like, is your three chances per day to swipe back if you decide you’ve wrongly swiped left – we all make mistakes after all!

How Much Does Bumble Dating Cost

You can download and start swiping for free with Bumble, all basic features are 100% free to use.
You can sign up to Bumble Boost which gives you extra features (listed below) and also purchase Bumble coins that allow you to purchase 'super swipes' (basically telling someone you REALLY want to get to know them)

How Much Does Bumble Boost Cost?

*we worked out potential savings based on the weekly price of £7.49 a week and 4 weeks in a month (not perfect, but close enough)

You can pay via credit card or your google play/apple account, PLEASE REMEMBER TO CANCEL AUTO RENEW! See below for 'How To Cancel Bumble Boost'

How Much Are Bumble Coins? 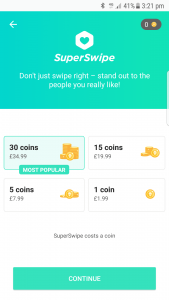 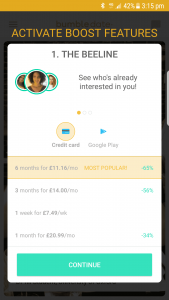 What Do You Get with Bumble Boost?

If you opt to pay for Bumble boost you will get:

The features are completely unnecessary in my honest opinion as are the Bumble Coins, which are the same as Tinder’s ‘super like’ (although Tinder’s option is free to use once every 24 hours) 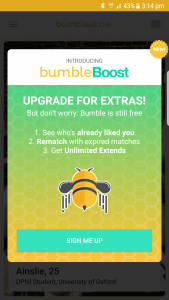 How To Cancel Bumble Boost

To Cancel Bumble Boost on Android:

To Cancel Bumble Boost on Apple

To Cancel Bumble Boost on Card

If you paid by card, just log into Bumble, visit the Bumble Boost section and hit 'cancel', easy as peas!

Signing Up to Bumble

Where Can I Use it?

Bumble is growing everywhere, North and South of the border, so much like Tinder you shouldn’t have any trouble finding a few matches irrespective of your location.

Rubbish answer but it varies!
This may be a controversial opinion but I find the users on Bumble to lean more towards long-term relationships, they just seem to be that little bit more ‘proper’ for want of a better word – sorry Tinder girls. Although to completely contradict myself, you will find a lot of the same people on both apps if that is what you are looking for.

How Safe is Bumble

As with all apps you have the ability to unmatch, report and block all users on the platform. So normal rules and advice applies to always be careful and tell friends / family if you are going to meet someone new and always arrange to meet in a public place.

An easy to digest, birds eye view comparison of the 2 main dating apps is below

It’s head to head with Tinder for this one. The two apps as you’ve heard are near identical with a few minor differences.

Getting the Bumble Dating App

Available on both android and Google, click below to download them on either the Apple or Android marketplace

Overall, Bumble is a great app. Personally, I like the feature that the women get to make the initial contact, it saves me waiting around for a reply and so I know anyone who contacts me is at least a bit more interested. Here are some of my tips if you decide to give Bumble a try:

1. Guys be patient when waiting for the ladies to make the first move. If you match someone you are particularly interested in, keep an eye out on the expiry time, if they don’t message you within 24 hours and you miss your small extension window then you have no way of getting in touch again.

2. If you like someone try and move it offline as soon as you feel the time is right (don't be creepy or forceful though) Bumble should just be an introductory tool, it shouldn’t be the basis of your relationship – a common trap to fall into with any dating app!

4. As with all dating apps, add some photos that bring you to life a bit more than the standard trout pout pics. Get a hobby involved or something a to show off your personality a bit more.

Bumble Reviews from You

Below you'll find some real world reviews from users of Bumble, if you have used the app, please leave a review